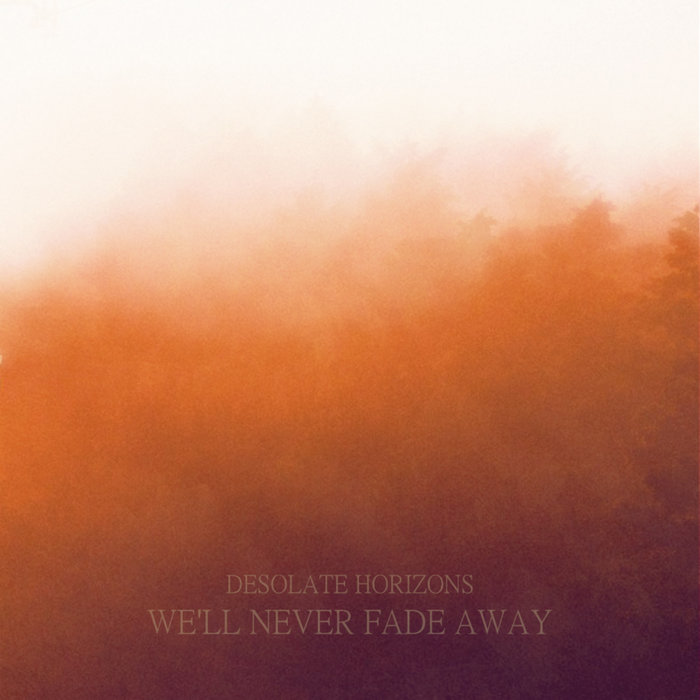 01. "I feel it’s vaguely lazy to compare the work of Russian Shoegaze/Ambient musician known only as “C. Horizon” to the work of Andrei Tarkovsky. I could easily be blamed for likening to two simply because they’re both from the same part of the world, but I’m going to do it anyway, but for good reason.
Listening to this latest album from Desolate Horizons, my first thought was of Tarkovsky’s Soviet era film STALKER (yes the one the game was based off of.) STALKER is a snapshot of an empty, pointless world that yields not but fear and uncertainty to those foolish enough to probe into its barren corners in search of an ill-defined “more”. We’ll Never Fade Away has that same feeling. It is an album brimming with both hope and emptiness, light and airy float through grandiose melodies that are brimming with sadness. It is the sun rising gloriously over a dead world. The song titles don’t help the sad mood, with tracks such as we loved each other long before we met... when we were just a lonely dreamers and as long as there's a light in the sky, i'll be waiting for you; it is an album packed to the brim with as much quality as feels.
I can imagine this acting as a perfect score to Tarkovsky’s STALKER possible an even better one than the unofficial soundtrack written by Lustmord and Robert Rich. If beautiful melodramatic depression in the form of ambient music sounds like your thing, then you’ll feel right at home here, for what it’s worth."
(c) Rob Crooks // Pyramid Noise

02. "This album is full of lavish and emotional textures, and I mean deeply emotional in every sense of the term. This album spares no expense to give you a spectrum of different moods and feelings, while keeping it widely open to interpretation within each listener.

Desolate Horizons’ success lies in the moods each song develops. “we were created from the loud sound” is euphoric, lush, and hazy. The song, little by little, fills you up with a sense of hope and wonder. It relies on giving you as little as possible and making the most of it, and the end result is happiness. However, that happiness is short-lived once “as long as there’s a light in the sky, i’ll be waiting for you” begins. This track counteracts the previous completely by bringing a wall of sadness and hopelessness to the forefront. Beyond that, the distant echoes in the background add to the profound feeling of being completely alone. Don’t let the track name fool you, the track gives the impression that whoever is waiting will be waiting for a long time, maybe even forever, with no sense of closure.

“make a wish” and “embrace me tightly so i could feel you breathe inside me” were songs that relied on a more loud and abrasive sound. “make a wish” gave you a cold atmosphere, and provided a very chilling feeling with it as well. It’s deeply rooted soundscape never let up a glimpse of light, and the song ends as powerfully as it began. “embrace me tightly…” however, gave us a more shoegaze feel, and it is inspirational and moving. The song name truly comes to life in the climax of the song when you hear the heavy breathing surround you, giving you an end to this story. This song might be the most emotional on the album, complete with a woven story and a grand ending.

The second half of the album, especially towards the end, include songs with long run times, and long names as well. “we loved each other long before we met… when we were just a lonely dreamers” and “ let’s stay here forever, just holding hands and gazing skyward at the radiant amber glow of a slowly dying sun…” find themselves over the seven minute mark respectively. Both are full with a world of emotions, and the attention to detail is flawless. Some might be thrown off by just how long this album can be, but the tracks are always breath-taking. I especially love “quietly, so as not to wake the butterfly” with its fantasy-like theme. I found it to be the most explorative on the album in terms of various sounds and ideas.

The title track, “we’ll never fade away”, is split into three parts, appearing at the beginning, middle, and end of the album. The first part is airy and enchanting and serves as a beautiful introduction to the album. The second part clocks in at around ten minutes long, and features a much richer and denser layering than the first part. It has a wonderfully eerie tone to it, and it gives you a lot to take in over the ten minute time span. The third and final part of the song lies at the end of the album, and it does a great job concluding the album. This track is very deep and heavy, only near the end do we get a dreamy, uplifting change to the song. These songs did a great job at keeping the central theme of the album alive in each song, and all three together display the depths to which Desolate Horizons went to create such an adventurous album.

To be honest, “we’ll never fade away” is a difficult album to sit through. It begs to be listened in full, and its length alone lets you know you’re in for a journey. However, when given a complete and proper listen, this album shines in its subtle, moving nature within each song. If you find the time, sit down and give this album a listen, pay close attention, and see if this album grows on you. It sure did for me."

Please support artists by purchasing the digital album, not streaming in excess. Thank you.

Desolate Horizons is an ambient/drone project of Constantine Horizon from Kazan/Russia, who has been releasing music on a steady basis since 2014.

Bandcamp Daily  your guide to the world of Bandcamp

Guests include Kassa Overall and Muriel Grossman, plus an LP of the week by Van Hunt.